Back
Film/TV Musical Actor Broadway Life Coach
Published on 05-11-2018 by YouArtiste From Musicals to Film – Interview with Bret Shuford
Bret Shuford has dedicated his life creating theatre and helping others do the same. He made his Broadway debut in the ensemble of Chitty Chitty Bang Bang, followed by Disney’s Beauty and the Beast, The Little Mermaid, and Amazing Grace. Most recently, he was seen on Broadway in Cirque du Soleil Paramour, and in the Martin Scorsese feature film, The Wolf Of Wall Street. He has continued to work regionally, and globally, self-producing his solo shows, and YouTube channel. As the Broadway Life Coach, Bret helps actors get more auditions, book more work, and find their self-confidence. He has spent years in the industry learning how to navigate a career based in theater and musical training, and build it into a career that has multiple on camera and original content opportunities.
/fot. Steven Trumon Gray and Chad Wagner/
„It's not about being liked, it's about becoming known, and if everyone likes you, you're not working hard enough.”

Interview with actor and Broadway Life Coach: Bret Shuford. The following is an excerpt from the interview conducted by Mike Moreno - founder of ActorCEO, and prepared by youArtiste.com


Mike Moreno: First of all, I would love to get your insight into, how did you make the transition from being a musical theater actor, or at least someone who was considered to be a musical theater actor within the casting community, into someone who was also considered for these other roles on small and the big screen?
Bret Shuford: Thank you for bringing this up because I think it's so interesting. I mean, a lot of people in this industry have a real hang-up when they see musical theatre on a resume and they are like, oh, they can't do on camera work, and I just don't believe there are any limitations. I believe quantum leaps are possible in this business, and I've seen people go from, you know, chorus to a movie star overnight in a lot of instances. So, I just think anything is possible. It's really that you just may have to work a little bit harder than you necessarily thought you did, in order to get the things you want. And for me, it was all about nurturing relationships, investing, meeting people and putting the time into building trust, so that people within those worlds would start to believe that it was possible. I wasn't just letting my resume limit me. So, you know, I took casting director workshops and built relationships through people I met at these workshops by doing good work by staying in touch, which I think is something that not a lot of actors really do naturally. We often think, which is an old mentality, that they [casting directors] already saw me in a class and they never called me in so, you know, I guess it didn’t work out. But I was like, have you followed up? Have you stayed in touch? That's how you build relationships. That’s something that came naturally to me, and that's really how television and film worlds, sort of started to come my way. It was mostly through meeting people, letting them see my work, and then staying in touch.

Are you staying in touch with people that you meet via social media and other places? Does that give you a little glimpse inside of who they are as people?
I believe relationships are give and take, and you can't expect someone to marry you on the first date, and so, you have to treat those relationships the same way. You can't just come in and be an actor for the short-term. This is a long-term plan. And so, you have to invest in those relationships in the long term. If we limit ourselves just by the job, then we're missing an opportunity to have these lifelong relationships. So, I use social media. I use email. I use the phone. I use all these things to invest my time in people because you show them how you want to be treated, and so, I go and see their shows, and I write them afterwards, and I tell them I loved it, and that’s how much I believe in what you're doing. Whether or not they return it [the favor], it always comes back to you in more ways than you can ever know.
„Everything we do in this business is an invitation.”
I think that's a very good point, and you know, some actors might hear this and maybe they haven't really started down this path of building these relationships and you might think oh, you know, how am I going to possibly see everybody’s show? How am I going to stay in touch with so many people and have a unique thing to say to them? Well, this is where you can start to think about your career strategically by finding people who are the right types of people, who are producing work that you are right for. That narrows the field down from everybody, right?
Yes.

You don't need to get in touch with everybody. You just need to get in touch with people who are doing the things that you are doing right now, and you can go out and see those specific shows if you want to be in those theaters, and these are the things that you can really focus your attention on.
Absolutely. Like you said, it's not about trying to get everyone on board. It's about becoming known, and you can only become known by people in a smaller way, and once those people know you, you can start to expand on it, but what I always say is that it's not about being liked, it's about becoming known, and If everyone likes you, you're not working hard enough. So, you know, you are trying to just put yourself out there and let other people decide. I think everything we do in this business is an invitation. When I'm emailing somebody, or when I'm sending a postcard, I'm not telling them they should like me, and I'm not making these decisions for them. I’m inviting them to decide. It’s like, hey, this is what I do, and you're totally welcome to come on board and if it's not your thing, no big deal.

What are some tips or lessons that you've learned in terms of focusing your attention when it comes to working on camera that’s different than focusing your attention when preparing for a musical theater work?
I think the biggest thing is not to limit yourself. Well, I'm doing TV film work, so I need to be understated, or I'm doing musical theater, so I need to be broad, and I think that you really have to kind of take these things project by project and for me, it's about watching the shows, seeing the kind of work people are doing, trying to create that world in my auditions and in my self-tapes, and trying to sort of not overthink it but really try to create the world of the show, and if I haven't watched that show, I'm not doing my job, right? I have to know what it is I'm going in for, and I think that sometimes people generalize things like, well I'm doing a TV film so I'm just going to understate it, and that's not quite enough. And, I also think that a lot of times we say that doing on camera work is so much smaller than what you do on stage, but it's even smaller than that [laughing]. So, I've learned how to allow myself to just be in the room, be present, say the lines, and let that be enough, and usually when I do that, it's when I book it. [chuckles] [...]
I always say that with structure comes freedom, and I think artists have this wrong way of thinking that if I don't structure things than I'm free to do whatever. And it's actually sort of like improv, if you don't have these rules in improv, you don't actually end up creating a scene. We can structure things based on the goals we want, so what I do is I put myself on tape. I watch myself until I feel that I like what I'm doing, and then I try to recreate that in the room [during the audition] [...] and it's not just about putting yourself on tape. It's about watching it. Make sure you watch it. There's that extra step. Don't just do it and then think it's good enough. If you feel it's good enough, than you need to watch it because when you see yourself do the work, you're going to know what's working and what isn't working.

When trying to understand the preparation that's necessary for the film work, were there lessons that you’ve learned on set of The Wolf of Wall Street? Were there things that you’ve picked up, that you were like, I had been thinking about it one way, but now having had this experience, having had the pressure, having had the time constraints, you were able to take away from and feel that it has helped you improve your process in the long run?
Well, number one, I’ve learned a huge social media thing. Social media, I think, is still relatively new to the film world, and so you know, respect the boundaries that they’ve set on the set, and when they don't want things posted, don't post it. So, there was a whole lesson around the behavior, but then, there was also this whole thing about watching. I spent the whole week sitting next to Matthew McConaughey, watching him. First off,  he kept his energy up just by being crazy and rowdy, and fun, and then, he was kind of strategic. I was watching him look at where the camera was moving, and then based his movements on how to frame himself within the camera's angle. And he wasn't even able to see it. He just had this awareness of where the camera was, and I thought, wow, and you know, sometimes I think we are just trying to be natural and in the moment, but really, a camera is just a bunch of photos flashing in front of everyone's eyes really quickly. So, think about how you would want to be framed with a photo, and that was something I really observed and thought it was cool. And he wasn't waiting for the director to tell him to do that. He was just doing it. But I think it's just natural in him now, he does it so much. 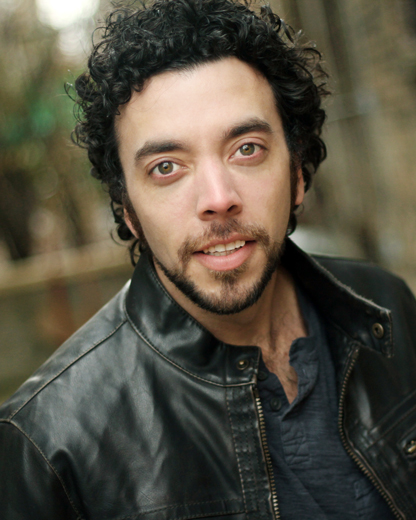 Hello! I’m an actor in New York City. The goal of ActorCEO is to understand how acting career is like running your own business, and using the insights we learn to create our own success.

Actor Artist Theatre Theatre in Kalisz
His acting debut was a great success. His role as Christopher in The Strange Case of a Dog at Night, directed by Bartosz Zaczykiewicz, delighted critics. Soon, on the stage of the Boguslawski Theatre in Kalisz, we'll see his next performance. Who is Michael Felek Felczak?
More
Featured categories
Film/TV Theatre Artist Director